Hero and the Hydra

It was a bright and sunny morning on the beach, and the Barbarian Hero was feeling eager to prove his worth. He had heard rumors of a fearsome green hydra that had been terrorizing the nearby village, and he had come to put an end to its rampage.

As he approached the rocky cove where the hydra was said to dwell, he could already see its five heads emerging from the shadows. The Barbarian unsheathed his two-handed sword of searing, a weapon imbued with the power to prevent the hydra's heads from regenerating. 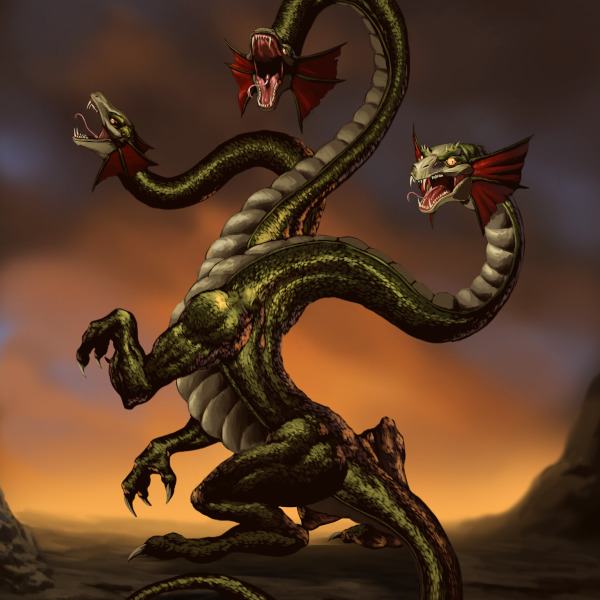 With a fierce battle cry, the Barbarian charged towards the hydra, determined to vanquish it once and for all. The hydra let out a deafening roar as it lunged at the Barbarian, its heads snapping and snarling.

But the Barbarian was a skilled warrior, and he deftly dodged the hydra's attacks, striking out with his sword whenever he saw an opening. One by one, he sliced off the hydra's heads, each time using the searing power of his sword to prevent them from growing back.

Finally, with the last head chopped off, the hydra let out a final, pitiful wail and collapsed to the ground, defeated. The Barbarian stood triumphant over his vanquished foe, his chest heaving with the exertion of the battle.

The people of the village, who had been cowering in fear, emerged from their homes to cheer the Barbarian and thank him for his bravery. And from that day on, the rocky cove was no longer home of the green hydra, and the people lived in peace once more.